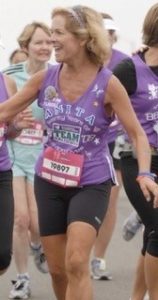 The summer of 2003 was promising. My husband and I had moved back to our home near the beach in southern Delaware, and I was back at a job I loved – selling radio advertising to local businesses in our small town. Best of all, my health was good. I had started the year with a hysterectomy that took care of the problems with pain and anemia that had plagued me for years. I was very active, running on the beach every day, and getting myself into even better shape for my 35th high school reunion. I was once asked if I was a fitness instructor – high praise, indeed!

As fall came on, I ignored little problems that cropped up – an eye infection, a gum infection, a couple of colds. And the weight I’d dropped on purpose seemed to come off now without effort – I even lost my hips, which have been with me since adolescence! Still, I went to my routine annual physical with breezy confidence.

Imagine my surprise a few days later when my internist called to say that some of my bloodwork showed abnormal values, and I needed to come in for additional tests. I did, but had no real idea what was going on until he sat down to discuss results with me. I’m not sure how I got so fortunate, but in this small beach town, I’d found the one doctor (a Brit) who looked for zebras. He had even done a quantitative IgM, an occurrence whose rarity I didn’t suspect until a few years later. My IgM was 6450.

Needless to say, these and some other results (low IgG, elevated CRP) were sufficiently concerning that he sent me to a hematologist for a consult. I didn’t know that a hematologist might also be an oncologist. I sat in the referral coordinator’s office with no idea of how my life was about to change. Then she told me she’d made the appointment for me, and when I asked where his office was, she said, “Oh, he’s over in the Tunnell Cancer Center.” I always say that’s when my life changed, not at the time of diagnosis. My stomach dropped, and I thought, “This is it!”

I was sent immediately for a CT scan, and when the film came back, the hem/onc showed me my enlarged lymph nodes, which were pretty much everywhere they could be. Based on that, and the results of a plethora of other tests, he was able to give me his provisional diagnosis of WM. I was again fortunate – he had done his residency in New York, where he had seen a number of cases of WM. A bone marrow biopsy (BMB) confirmed his suspicion – in fact, the procedure yielded only a dry tap (another thing I had to have explained.) It was only at my insistence that he shared with me a prognosis of 3-5 years more to live!

He wanted to wait before starting treatment, based on the idea prevalent back then that once treatment began, there was no going back. He urged me to get a second opinion, and I went to Johns Hopkins for that.

By this time I was becoming symptomatic, with increasing fatigue, swelling of my legs from the lymphadenopathy, and just generally feeling crappy from my compromised immune system. The learned doctors at Johns Hopkins redid all the tests except the BMB, and confirmed the WM diagnosis. They also recommended initiating treatment, and agreed with my oncologist that fludarabine was a good choice. (Remember, this was 17 years ago!)

I started chemo in early December, and I remember at Christmas time watching my husband and daughter decorate the house and the tree as I watched, too tired to join in. Fludarabine treated me well – after five rounds of infusions, my IgM dropped from 6450 to around 2100. However, because I was experiencing a few side effects, my doctor discontinued treatment. Things went swimmingly for a couple of years, with my IgM dropping to a low of 1290 in August 2006.

Late that year we moved back to Florida for good, but I went back to see my oncologist in Delaware in early 2007. He told me I’d need to find a new doctor in Florida, because my IgM was on the rise, and I should get new baseline tests.

It took me a few months, but I was fortunate, through connections at my job at the Leukemia & Lymphoma Society, to find south Florida’s WM specialist. When I met him in June of 2007, he determined my WM was back on the warpath (lymph nodes further enlarged, IgM about 3500) and started me on R-CVP. After a few rounds, it was obvious the treatment was ineffective, and the vincristine gave me neuropathy in my fingers. So I was switched to bortezomib and dexamethasone, resulting in the worst experience I’ve ever had. First, the high-dose dexamethasone (40 mg) blew me up; I gained about 15 pounds in a short time. And the bortezomib (now well-known for inducing neuropathy, but much less so back then) induced horrific pain in my back and legs. It was only after serious entreaties on my part that he agreed to discontinue the bortezomib.

I was then started on what turned out to be three years of maintenance Rituxan. I didn’t mind this too much; side effects were minimal, but as time went on, my IgM began to rise again, and my lymphadenopathy had never really abated, which was most concerning. So, in January of 2011, I started five rounds of bendamustine and Rituxan.

I didn’t enjoy the GI side effects, but the treatment was effective in reducing my IgM and causing my lymph nodes to shrink somewhat. I thought I was pretty much home free – no symptoms, IgM below 1000, only seeing my oncologist quarterly.

Not so fast, said my lymph nodes! A CT scan at the end of 2013 showed that a lymph node had wrapped itself around a kidney, causing hydronephrosis. (I had no symptoms.) I was unhappy at the thought of another encounter with chemo, and then my doctor mentioned ibrutinib.

I’d read about it, seen the results of Dr. Treon’s clinical trials, and heard it discussed at meetings and on the IWMF talklist. Now it was suggested I start taking it, with my oncologist even arranging to have the pharmaceutical representative available to talk to me about financial assistance. That was January of 2014. I’m thrilled to say that, nearly seven years later, and with a few unrelated ups and downs because of injuries and surgeries, I’m still in a deep remission. My IgM is below 100, and CT scans show only artifacts of those enlarged lymph nodes. Ibrutinib really has proven to be a miracle treatment for me, with few side effects.

The years since I was diagnosed have been filled with new and deeper friendships, adventure, and so much love. For years I was able to participate in endurance events, running five half marathons and cycling numerous distance events to raise money for blood cancer research through LLS’s Team in Training program. Since my injuries a few years ago put an end to that, I have participated in Light the Night. I will continue as long as I’m able to raise funds to find cures. God is good, all the time!